How To Get More From Solar Panels in Winter

Solar panels are a great way to reduce your electric bill while also making your home or business more energy-efficient.

But in the winter months, those living in northern regions have to contend with scant sunlight and muggy skies for months, which begs the question: is there even a benefit to having solar panels outside of warm climates? And do solar panels work during cold winters? After all, solar farms are typically set up in hot, sunny deserts, not the swirling, seasonal arctic of the American northeast.

But fear not northerners - luckily the answer is a resounding yes, solar panels do work in winter. In fact, under ideal conditions, solar panels can work even better in winter - and here’s why.

Solar panels in winter - how do they work?

It might seem baffling that solar panels can still be productive in the winter, but to understand why requires understanding how they work in general.

Despite their association with hot, dry climates, solar panels actually work better in the cold than in the heat, according to Third Sun Solar.

This is especially helpful as it can somewhat mitigate the loss in production of energy that comes with fewer daylight hours and cloudy skies. Not to mention, solar panels can catch light that is reflected off the snow, which can further increase the amount of light received in a day.

Falling snow will have minimal effect on a solar panel. However, collecting snow on solar panels can make it less effective.

According to Energy.gov, a small dusting of snow shouldn’t impact your panel's performance. A thick blanket of snow can be a different story, however.

Third Sun Solar also acknowledged that a heavy covering of snow can impact your panel’s performance, saying it “all but shuts off production” of the device while it is totally covered. But they also noted that, when taking a look at the big picture, the loss of electricity generation isn’t the big deal it may seem.

If you aren’t sure how to clear snow from solar panels, here’s a few ways to get them cleared without damaging the panels.

Overcast skies in winter can also play a part. While an overcast sky does not mean a solar panel won’t be getting any sunlight, it does mean it may generate less electricity.

Still, even with an overcast sky, a solar panel can generate electricity, which provides a passive source of energy for your business or home.

Third Sun Solar says their solar panel’s estimated output isn’t just based on the most ideal conditions. They will take into account winter’s shorter days, snowfall, and the sun’s orientation when estimating the output of their solar panels.

Another concern for some would-be solar panel owners is rain making their panels produce less electricity than estimated. Third Sun Solar says not to worry, not only do solar panels work in the rain but things like rainy weather can be taken into account when estimating the panel’s output.

“Just like cloudy days, solar panels will still produce electricity in the rain,” Third Sun Solar says. “We take regional weather data into account when estimating the output of a solar system.”

How to get the most out of solar panels year-round

In addition to the tips above, following a few simple steps year-round can ensure you maximize your solar panel’s performance through every season:

Make sure you find the optimal tilt for the solar panel

Everybody knows that the sun rises in the east and sets in the west - but did you know the sun can travel higher or lower in the sky depending on the latitude you are in? Because of this, it’s important to make sure that your solar panels are set at the proper angle for your area. 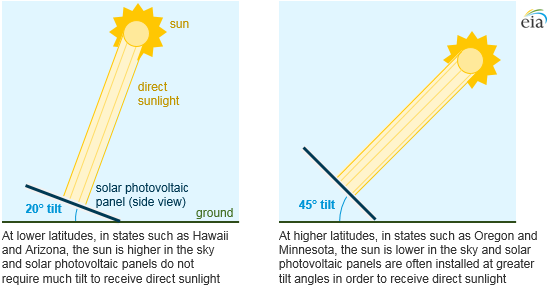 Use energy-efficient appliances and devices

Saving energy by using a solar panel is great, but if your appliances and devices are gobbling energy up inefficiently, your business won’t be able to see the benefits.

Use LED lights that can be programmed for turning on and off at certain hours. Smart thermometers ensure you're not heating/cooling a room that doesn’t need it. Energy-efficient dishwashers can save as much as 12 percent energy. Changing out devices like these ensure you aren’t having your solar panel’s energy drained needlessly.

Typically, rain will actually clean your solar panel for you. However if it is during a dry season, giving a modest cleaning to remove bird droppings, leaves, or dust every few months can help keep them working efficiently.

According to Greener Choices, a quick spray from a garden hose should do the trick if the panel needs a light washing. Just be careful not to use high-pressure hoses, as this can cause scrapes.

If the panel needs a more serious cleaning, ask your solar panel provider for the best cleaning method. This may mean giving the panel a gentle scrub with soap. If you are unsure how to clean your solar panel or are uncomfortable doing so, it is best to hire a professional.

In addition to the money you save with a solar panel, having the best electric and natural gas rate available is crucial to saving on your business’s energy bill.

At Integrity Energy, we specialize in helping small-to-medium size business owners find the best fixed-rate plans to keep their energy costs flat and manageable for the long run.

We offer rates from over 30 major suppliers, allowing you to have a wide variety of plans to choose from, and we pride ourselves on providing next-level service and guidance to our customers to help them make the best energy choices for their needs. Over the last decade, we’ve helped over 40,000 business owners across Texas and the contiguous U.S. save more on energy bills and stay price protected for the long run.